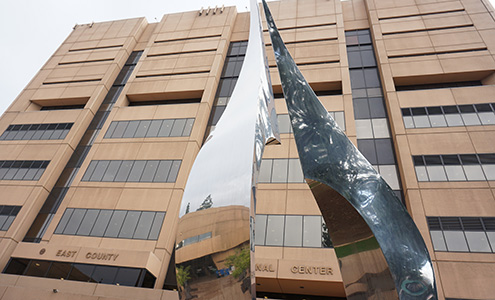 The District Attorney’s East County branch is located in the City of El Cajon. The branch serves more than 20 communities and covers more than 2,000 square miles. Deputy District Attorney Michele Linley serves as the Division Chief, with Deputy District Attorney Joe McLaughlin serving as Assistant Chief. In 2017, the branch reviewed cases on 2,735 felony defendants and 10,969 misdemeanor defendants. Deputy DAs took 33 felony and 56 misdemeanor defendants to trial, including those tried by the branch’s Gangs, Narcotics, Sex Crimes, Economic Crimes and Family Protection Divisions. A large percentage of cases were settled prior to trial, providing a significant cost savings to the public without sacrificing public safety. 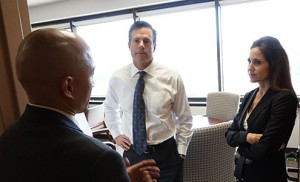 Because of its location and proximity to Native American reservations and casinos located in East County, the branch often handles cases involving crimes committed on the reservations or arising from casino activities. Our cooperation and partnership with the tribes, their tribal councils, tribal law enforcement, and the Sheriff’s Department has enabled us to successfully investigate and prosecute these cases resulting in increased public safety on the reservations and in the casinos.

Noteworthy cases during 2017 include:

Deputy District Attorney Valerie Ryan prosecuted Larry Jones for the armed robbery of a medical marijuana dispensary. The defendant purchased marijuana, and then returned 20 minutes later with an unknown man – both masked and armed. The pair took marijuana from the dispensary, and various items from the employees. Jones was convicted of two counts of robbery with a gun and sentenced to 25 years and four months in prison.

Deputy District Attorney Jeff Lazar prosecuted Paul Carr for the murder of Pastor Craig Hodson. Carr had various altercations with the victim’s wife and was ultimately asked to vacate the cabin he was renting from the victim. Carr testified that he went to discuss the matter with the victim, and the victim pulled a chain saw on him. The defendant claimed he shot the victim in self-defense. The jury didn’t believe the defendant’s story and convicted him of first-degree murder. Carr was sentenced to 50 years-to-life in prison.

Deputy District Attorneys Will Watkins and Chris Rhoads prosecuted Cindy Ceballos for the stabbing death of Christalina Indish on the Campo Indian Reservation. Both the defendant and the victim had been in a relationship with the same man. On the morning of the murder, Ceballos went to Indish’s house looking to resolve an earlier incident. A fight ensued and Ceballos stabbed Indish four times in the chest and twice in the neck, killing her. Ceballos was convicted of first-degree murder and sentenced to 26 years-tolife in prison.

Deputy District Attorneys George Modlin and Jeff Lazar prosecuted a pair of brothers for murdering George Lowery, a homeless man. The Mostrong brothers went to the Santee sand pits to recover Austin’s paintball gun. The gun was taken by Lowery a week earlier, after Austin used it to shoot homeless people. The two brothers beat Lowery to death, hogtied him, poured rubbing alcohol on him, threw him in the bushes face-down and covered him with a piece of plywood. When the victim was discovered, he was brain dead. Defendant Haley Suder helped arrange for a ride for Austin after the murder. Austin Mostrong pleaded guilty to second-degree murder and assault likely to cause great bodily injury. Preston Mostrong pleaded guilty to voluntary manslaughter and mayhem. Austin was sentenced to 20 years-to-life in prison. Preston was sentenced to 24 years in prison and Suder was given credit for time served.

In this case, Deputy District Attorney Matt Carberry prosecuted Lance Benson for the murdering Trammell Rizzuti. Benson and Rizzuti were drinking together on the night of the incident. About 4 a.m., the newspaper delivery person found Rizzuti dead on a sidewalk. Rizzuti had been stabbed eight times with a knife, and had a hammer clutched in his left hand. Benson admitted to the murder, but claimed self-defense. Exceptional investigative work pieced this case together. Benson ultimately pleaded guilty to second-degree murder with a knife and attempted murder in another case. He was sentenced to 24 years-to-life in prison. 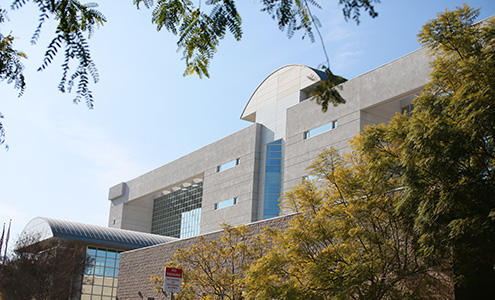 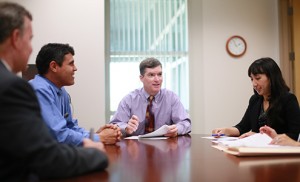 Defendant Michael Kane pushed 60-year-old Kevin Kelley to the ground and robbed him of the $900 he had in his pocket. The fall caused Kelly to fracture his hip. After having a partial hip replacement, Kelly was discharged to a skilled nursing facility. Two weeks later, Kelley was re-admitted to the hospital because of vomiting and a spiked a fever. He died one day later from septic shock, attributed to a urinary tract infection from the insertion of a catheter at the nursing facility. Kelley had a range of pre-existing medical conditions including diabetes, liver failure, a bone marrow disease and recent methamphetamine use. The case focused on tracing the cause of death back to complications with the hip surgery. This was complicated by the nursing home diagnosing Kelley with a neurogenic bladder which would be an intervening cause. In the end, the jury convicted Michael Kane of first-degree murder and he was sentenced to 86 years in prison.

Defendant, Roberto Flores, was stopped at a red light when he saw Oceanside motorcycle officer, Brad Hunter, writing a ticket. When the light turned green, Flores accelerated his car directly at Officer Hunter, and hit him. The impact slammed Hunter into the front windshield, flipping him over the car as Flores sped away. After Flores was arrested, he confessed the crime to a confidential informant and undercover officer. Flores bragged about intentionally slamming into the officer due to his hatred of police. Flores was convicted of first-degree attempted murder upon a peace officer and he was sentenced to 29 years-to-life in state prison. 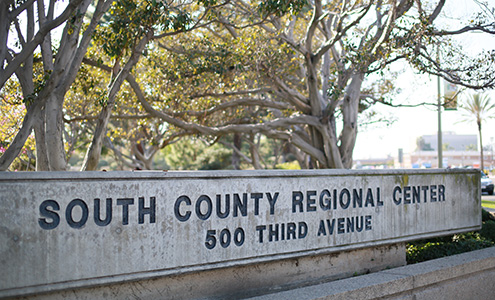 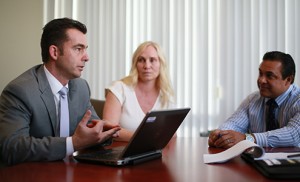 The South Bay branch handles unique cases because of its proximity to the U.S.-Mexico border. We work with the Department of Homeland Security to prosecute cases that involve drug smuggling, identity theft and stolen vehicles that occur at the Otay and San Ysidro Ports of Entry. The branch also prosecutes cases from R. J. Donovan State Prison and the county detention facilities in East Mesa. Two experienced prosecutors, Chris Blaylock and David Vallero, handled these difficult cases in 2017.

The South Bay branch is also involved in the community by reaching out to the youth in the Sweetwater Union High School District. For example, prosecutors made a number of anti-bullying presentations at local schools. And, through programs such as the Open Doors to Justice, South Bay middle and high schools students learned about the criminal justice system. Students met and learned from attorneys, judges, court staff, and participated in mock court hearings through these partnerships.

In June 2016, Jesse Bernardo entered a 7-11 store and pointed a handgun at the store clerk. He demanded money and forced the store clerk to empty the cash register. As the Bernardo left, the store clerk took a picture of the defendant’s getaway vehicle with his cell phone. Police subsequently located and arrested the Bernardo. Deputy District Attorney Christopher Chandler successfully presented this case at trial and a jury convicted Bernardo of robbery. He was sentenced to 12 years in state prison.

Anthony Pollock and the victim, who worked together at a catering company, got into an argument, which continued over several days and involved text messages. In the messages, the defendant threatened to harm the victim. In January 2016, the defendant showed up at the victim’s house, pulled out a handgun and fired five shots at the victim. The victim was shot in the abdomen but survived his injuries. Deputy District Attorney Derek Grilz prosecuted the case. The defendant was sentenced to 17 years in state prison.

In May 2015, the victim was riding a red Ducati motorcycle north on Interstate 5. The defendant, Darla Jackson, drove alongside the victim after which the victim accelerated and moved back into the lane ahead of Jackson. The victim switched lanes and slowed down to be alongside the defendant and kicked the passenger side door of the defendant’s vehicle. After the kick, the defendant swerved to the right as if trying to hit the motorcycle. The victim started moving to the right lanes and took an onramp. The defendant followed the victim across all lanes of traffic. The estimated speed of the victim and the defendant, per witnesses, was 70 to 80 miles per hour. Jackson then hit the back of the motorcycle once or twice, knocked the victim off of his bike and ran him over, killing him. Deputy District Attorney Laura Evans prosecuted the case. Jackson pleaded guilty to voluntary manslaughter and was sentenced to six years state prison.

Saul Orozco and the victim gathered with other friends at the victim’s house in August 2015, when they began to argue. Orozco grabbed a kitchen knife and stabbed the victim, who tried to run while screaming for help. The defendant chased the victim into a neighbor’s residence where he continued to stab him. The victim was pronounced dead at the scene. Deputy District Attorney Kristina Gill prosecuted this case, resulting in a murder conviction. Orozco was sentenced to 15 years-to-life in prison.