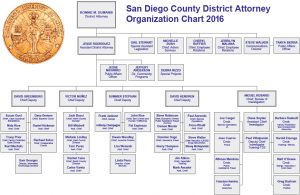 About 320 attorneys serve a county population of more than three million residents, making the Office of the San Diego County District Attorney the sixth-largest in the United States. The Bureau of Investigation’s more than 115 sworn investigators made it one of the largest police forces in San Diego County in 2016.