Insurance fraud in the United States costs consumers an estimated $80 to 90 billion per year nationwide. In California, insurance fraud is a $15 billion a year problem. It’s the second-largest economic crime in America, exceeded only by tax evasion. The San Diego County District Attorney’s Insurance Fraud Division addresses this problem by dedicating specialists to handle complex insurance fraud prosecutions. In 2014, we filed criminal charges against 474 defendants. To date, 418 defendants have been convicted while other cases are pending.

Our business plan is to aggressively prevent crime, conserve resources, and maximize investigations and prosecutions with available staff. We focus heavily on preventing fraud. Our outreach efforts consist of giving near weekly presentations to business and labor groups informing each side of their rights and duties and of the consequences of fraud in applying for or denying benefits. We secured public service announcements on television, social media, radio, newspaper, and billboards with the message that insurance fraud is a felony, therefore: DON’T DO IT. DON’T TOLERATE IT. REPORT IT to our hotline 1-800-315-7672.

In 2014, the Insurance Fraud Division was led by Chief Dominic Dugo and Assistant Chief James Waters. The division consists of six grant-funded units:

Workers’ compensation fraud consists of premium fraud, provider fraud, uninsured employer fraud, and applicant fraud. Premium Fraud involves businesses misrepresenting their true payroll to an insurance company in order to purchase workers’ compensation insurance at lower than the proper rate. These employers often evade taxes by paying workers in cash. This cash-based payroll is known as the “underground economy.” In California, the underground economy costs $7 billion dollars a year in lost revenue. According to the Franchise Tax Board, approximately $6.5 billion is lost to income tax evasion in California.

Insurance Fraud staff work with the California Labor Commissioner’s Office and the Contractors’ State Licensing Board to investigate and prosecute employers without workers’ compensation insurance. Workers’ compensation provides injured workers the security of knowing they will receive compensation and medical treatment as a result of their work-related injury. 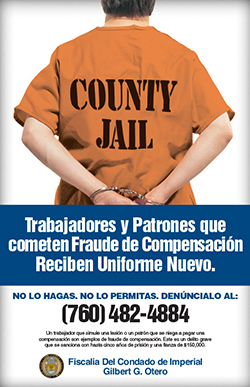 The Worker’s Compensation Applicant Fraud Unit prosecuted Yolandi Kohrumel in 2014. The defendant broke her toe at work and claimed to be wheelchair bound due to complications from surgery on her foot. The defendant was paid $1.5 million in disability payments over a nine-year period until the insurance company was tipped off and obtained video of her standing, walking and lifting moving boxes for hours.

The defendant’s father, Anton Buitendag, was also charged with insurance fraud. Kohrumel and her father began demanding that he be reimbursed for the around-the-clock care they said she needed and he provided.

Both Kohrumel and Buitendag entered felony guilty pleas. Korhumel was sentenced to one year in jail and her father was sentenced to 180 days in jail. Restitution of $1.5 million was ordered.

In 2014, our office participated in a statewide operation conducted by the California Department of Insurance. “Operation Crash and Buy” came to a conclusion in November, and resulted in over 150 cases filed across 22 counties. In San Diego, 35 defendants were charged in 30 criminal cases. The target of the operation were drivers who had no auto insurance or were underinsured and added coverage after a collision. According to California Insurance Commissioner Dave Jones, “Insurance fraud is an expensive drain on the state’s economy that totals into the billions of dollars annually in California. The costs of these scams are passed along to consumers through higher rates and premiums – everyone pays for insurance fraud.”

The Life and Annuity Consumer Protection Program investigates and prosecutes unscrupulous life insurance agents and others who seek to steal the savings of victims through power-of-attorney abuse and fraudulent claims on a legitimate policy. These scams often target senior citizens. The effect is profound and life-altering since seniors do not have the time or opportunity for financial recovery. Our program is committed to working diligently to protect senior citizens and their finances from those who would do them harm.

Working with the California Department of Insurance, we filed criminal charges against Michael Woodward, and his wife, Melissa Woodward. They were arrested in Las Vegas and extradited to San Diego. Michael Woodward pleaded guilty to residential burglary, theft from an elder, theft greater than $500,000, transacting insurance without authorization, and failure to file state tax return. He sold bogus home healthcare policies to nearly 400 seniors throughout California. Melissa Woodward pleaded guilty to failure to file a tax return. Michael Woodward was sentenced to 11 years in state prison. The court ordered the couple to pay restitution of $3,064,316. Seizure and liquidation of defendants’ property was nearly $1,598,000 and was distributed by the DA’s Office to 278 living victims and the heirs of 107 deceased victims. A total of 385 victims received checks from the DA’s Office.

“The defendants in this case were ruthless and heartless in the way they targeted the elderly and sold them fake insurance policies,” DA Dumanis said. “I’m proud of the work our Insurance Fraud Unit is doing to bring justice to these victims and other senior citizens who became victims of elder abuse in the community.”

In 2014, RATT obtained 96 convictions. The unit participated in “Operation Rolling Stone” which was designed to go into an area for 30 days and work with the local law enforcement to stop auto thefts. Examples of success included the identification of homes in the southern San Diego County that were being used for chop shops.

The unit also participated in a motorcycle interdiction program. San Diego County had a significant increase in the theft of sport motorcycles. This increase seemed to happen after the release from prison of prior RATT targets who were known prolific motorcycle thieves. RATT focused on investigating these individuals, and were able to arrest them with stolen motorcycles again.

One of RATT’s biggest projects in 2014, was the Jeep interdiction project. San Diego County had a significant number of newer model Jeep brand vehicles stolen in 2014, with a majority being found stripped in Mexico.

RATT reviewed the theft of every Jeep in the county, and ultimately discovered that the suspects were casing Jeeps in San Diego and then obtaining a dealership security code in Mexico to open the Jeeps.

The Jeep investigation is a significant breakthrough for law enforcement as the number of Jeeps being stolen was about one a day from March 2014 through November 2014. Law enforcement has not seen this type of criminal enterprise before. With this new information, there is a potential of solving auto theft rings in other counties.